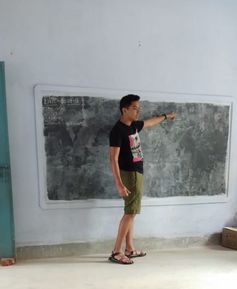 This summer I went on my yearly visit to Jamshedpur – an industrial city in one of the poorest states in India – to visit my grand-parents and relatives. Normally I’d stay in our house, occasionally going out for lunch or shopping. I was blissfully unaware of what some parts of the city were truly like - I had not visited the slums. I had not seen the massive fields which a single man had to tend to just to feed his family. My family and I decided it was time for me to see the reality of the situation. My mother’s former classmate runs an NGO that helped support Government-run schools  and we felt that a school was an ideal place to visit because I could easily compare my lifestyle and education for a child of a poor family. During this period, I spent time at three schools, watching how children learned and even taught them Math.

The facilities in the schools I visited were, as I expected, extremely minimal. The buildings were old and run-down with just basic fans. Air-conditioners are unthinkable despite temperatures exceeding 40 degrees celsius. Each small classroom had a blackboard and tables that would cater to  12-15 children in a Hong Kong school, but squashed 30 children in these schools. The teacher would have nothing but chalk, a basic textbook and their intuition to try and teach classes.

The teachers and their methods of teaching were completely different from the way I am taught in Hong Kong. There are no quality checks in the Government-schools, so teachers would often not turn up to class and students would be left alone. They couldn’t get substitute teachers, because there were only 9 teachers in a school of over 300 students. As a result of this, classes from different grades would be taught together, with the teacher being forced to divide the board in two – each half for one grade. The teachers who did come to school were generally not bothered about their teaching and were often on their phones instead of helping and teaching their students. When they were teaching, they simply asked students to repeat sentences or solve problems. There was very little actual teaching or explaining concepts. The poor quality of teaching was even more evident when compared to the teachers from ALIG. ALIG teachers had to adhere to quality checks and their classes were monitored. This meant that teachers knew they had to teach their students well, and so these classes were clearly more engaging and interactive for the students. The ALIG teachers cared more about their students, and it showed in the knowledge that the students had.
Perhaps the most shocking and moving part of my experience was the students themselves. They were constantly smiling and happy even though many of their families were in absolute poverty. Many of the parents did not care about their child’s education, and would’ve preferred if they were working, but the children came because they wanted to learn. One of my favourite memories was when I was teaching, and it was time for the student’s break, but none of them left the classroom because they all wanted to continue learning. They dreamt of being scientists and teachers, and they wanted to do everything possible to achieve their dreams. They were incredibly determined and also clever. A boy in 3rd grade finished doing sums barely seconds after I’d written them on the board. An 8th grade class picked up the concept of fractions in just a day. That may not seem like much, because you’d expect 8th grade students to be able to do fractions easily, but the children had never even heard of the concept before. They didn’t lack intelligence - they’d just never been given the opportunity to learn these concepts before. However, in the same 8th grade class there were people who could barely do addition and subtraction. They had either been forced to skip a lot of school because of their parents, or were not explained basic concepts properly or maybe just weren’t good at a particular subject. While in Hong Kong, a teacher can give each student individual attention, in these schools a teacher has no time for the weaker students. They can’t slow down 39 other people, just to cater to one individual, which means that a student gets left behind and his/her education is of little value.

My experience made me feel lucky to be given the opportunity to be educated at such high standards, but at the same time it also made me frustrated and sad that these children weren’t getting similar opportunities. They are no less deserving than I am. That one bright student shouldn’t be working as a street-cleaner her entire life just because her teacher didn’t have the resources to push her education further. The girl who is struggling with Math shouldn’t go through 9 years of education not being able to do simple sums just because her teacher doesn’t have the time to teach her. Something has to change, and I believe that the work ALIG is doing is taking a step in the right direction.